Divorces drop as husbands get better at housework…..

Wives wanting to end their marriage within five years has reached the lowest level in four decades, statistics show – almost halving from its peak in 1986.

Marriage experts say the change has been led by a cultural shift with men more willing to share childcare and domestic responsibilities, making women ‘less cross’.

As women are more likely to instigate divorce, this contributed to a decline in the divorce rate over the past two decades.

Therefore, I conclude the secret to a happy marriage is – Share The Chores! 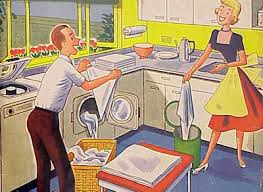