Leap Day, on February 29, has been a day of traditions, folklore and superstitions ever since Leap Years were first introduced by Julius Caesar over 2000 years ago.

Women Propose to Their Men

According to an old Irish legend, or possibly history, St Brigid struck a deal with St Patrick to allow women to propose to men – and not just the other way around – every four years.
This is believed to have been introduced to balance the traditional roles of men and women in a similar way to how leap day balances the calendar.

In some places, leap day has been known as “Bachelors’ Day” for the same reason. A man was expected to pay a penalty, such as a gown or money, if he refused a marriage proposal from a woman on Leap Day.
In many European countries, especially in the upper classes of society, tradition dictates that any man who refuses a woman’s proposal on February 29 has to buy her 12 pairs of gloves. The intention is that the woman can wear the gloves to hide the embarrassment of not having an engagement ring. During the middle ages there were laws governing this tradition.

People born on February 29 are all invited to join The Honor society of Leap Year Day Babies.

In Scotland, it used to be considered unlucky for someone to be born on leap day, just as Friday 13th is considered an unlucky day by many. Greeks consider it unlucky for couples to marry during a leap year, and especially on Leap Day. 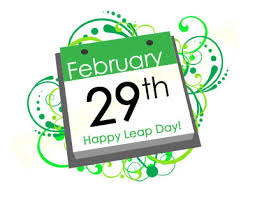