Ten interesting facts about marriage to share with friends….

1. Over 75% of people who marry partners from an affair eventually divorce.

2. Marrying younger than age 25 dramatically raises the divorce risk. Also, the divorce risk is higher when the      woman is much older than the man, though the reverse isn’t as a strong factor.

3.The average married couple has sex 58 times per year, or slightly more than once a week.

4. People whose marriage has broken down at the time they are diagnosed with cancer do not live as long as cancer patients who are widowed, have strong marriages, or who have never been married.

5. A marriage ceremony typically ends with a kiss because in ancient Rome, a kiss was a legal bond that sealed contracts, and marriage was seen as a contract.

6. Recent research has found a huge decline in happiness four years into a marriage with another decline in years seven to eight. In fact, half of all divorces occur in the first seven years of marriage, which gives rise to the popular term “the seven-year itch.

7. The term “groom” is from the Old English guma, meaning “man.

9. A 2008 study found that marital satisfaction improves once children leave home. However, if marital problems existed before, an empty nest often reveals those otherwise masked issues.

10. More than friendship, laughter, forgiveness, compatiblility, and sex, spouses name trust as the element crucial for a happy marriage. 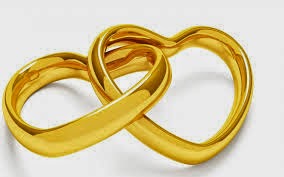